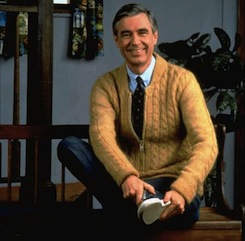 From 1968 to 2008, when PBS permanently pulled Mister Rogers’ Neighborhood from their programming line-up, kids tuned in every day to watch Fred Rogers cheerfully come home and take them on an adventure filled with fantasy characters and life lessons. Though the beloved Mister Rogers died in 2003, the lessons that he passed along to those children, now adults themselves, have carried on. For the sake of nostalgia, here are 10 of the things that a generation of children learned from Mister Rogers and his neighborhood.

Despite the impact that he had on a generation of children, there’s nothing in today’s television landscape that bears much resemblance to the gentle, soft-spoken Mister Rogers and the world that he created. Modern kids’ programming, full of blaring sounds and garish colors, is on the other end of the television spectrum. While those shows may have their merits, the slower pace and hopeful message shared by Mister Rogers will always hold a special place in the hearts of his loyal viewers.

0saves
Save
If you enjoyed this post, please consider leaving a comment or subscribing to the RSS feed to have future articles delivered to your feed reader.
← 10 Ways Cartoons Help Kids Learn About Different Cultures | Is the Bedtime Story a Dying Art →