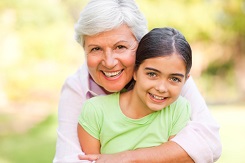 Sometimes kids say the sweetest things. Other times, they make their parents cringe with embarrassment. Either way, hearing a child’s perspective on different topics is always enlightening. The subject of old age is no exception. As much as parents try to teach their kids to respect their elders and value those who have lived longer than them, children seem to cultivate unique views on the elderly and often have no qualms about sharing them.

“Old people wear glasses and they can take their teeth out.”

Blame it on the stereotypes portrayed on children’s television that kids seem to think that everyone they consider old must have glasses and dentures. Few things make a parent cringe more than if their child decides to approach an older adult to put in a request for denture removal, though. From a child’s point of view, however, these requests are not offensive. They are simply fun and entertaining.

Skin loses elasticity as it ages, so when children go in for a kiss, they often remark that the skin of elderly relatives is soft or mushy. Kids blurt these things out without knowing that it might be obnoxious. Often, a mushy face is a delight for little ones, and they think that they’re offering a compliment, when they’re actually making a pointed observation about aging.

Again, due to stereotypes, children often think that older people come with certain “equipment,” much like their action figures at home. If someone informs a child that they are old, a child may challenge the statement by demanding to see a cane as proof.

Some people do experience a decline in memory as they get older. Therefore, older friends and relatives may ask your child the same question more than once. Unfortunately, being unaware of the shame that may accompany this, children often have no problem pointing it out.

Grandparents everywhere can be blamed for this concept. Because so many kids have such generous elderly family members, they often begin to think that shopping sprees at the toy store are something that old people come programmed with.

In Japan it is called “kareishu,” the distinct smell that older adults have. It is not an unpleasant scent, but it is different from other age groups. Researchers speculate that it is an evolutionary adaptation that has equipped each age group with its own scent. All kids know is that they can sniff out a grandparent if they need to.

This is something that is often made light of on television shows, but understanding aging and death is something that kids can have some trouble with. The first thing they need to know is that it is unkind to say such things. The second thing they should be made aware of is that everyone will age and eventually die.  This will help them understand that they too will one day be in the older person’s role. Finally, they need to know that they don’t have to worry about this. Even if they made the statement, as many kids do very matter-of-factly, children need to be told that even though they might think someone is very old, that person probably still has a lot of years left.

“Can I help you cross the street?”

This one is not such a bad stereotype as it does teach kids to help those who are older than them. That being said, it can be very embarrassing and insulting to the older adult who is perfectly capable of crossing the street on his own.

“Grandpa lives at the airport.”

Many long distance grandparents report that their grandkids assume that they live at the airport because this is where the child finds them when picking them up over for a visit.

All jokes aside, it is very important to teach children the value of the elderly. The truth is, they have lived longer and have wisdom the younger generations lack. They have also learned the value of slowing down in life and taking the time to “smell the roses.” This can make them the most fun members of the family, especially for kids. Children should be taught that the elderly are not to be discarded or ignored, and that one day they too will take their place as elders in society.

0saves
Save
If you enjoyed this post, please consider leaving a comment or subscribing to the RSS feed to have future articles delivered to your feed reader.
← 21 Blogs with Insightful Tips for Helping Kids Through a Move | 25 Blogs Featuring the Most Inspiring Parenting Stories →