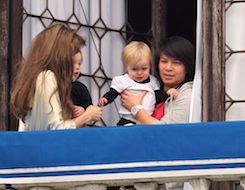 With society trending towards the ideal of two full-time working parents and the increasing demand of a fast paced culture, more and more parents are looking to nannies to fulfill their childcare needs. Nowhere is this trend more apparent than in Hollywood, where over-scheduled celebrities with big budgets rely on a troupe of nannies to look after their children and households while they’re on location or touring the world to perform. In addition to their personal chefs, housekeepers, drivers and personal assistants, it has become increasingly popular for celebrities to bring multiple nannies on staff to manage the care of their children. Aside from entrusting their children’s lives to the care of beloved nannies, they also place a lot of trust in those nannies’ ability to be discreet. With their multi-coastal estates, jet-setting careers, crazed paparazzi and fanatical followers, celebrity moms still manage to make it look easy. Fortunately, they have the trusted help of Hollywood’s best private childcare providers at their disposal.

Life as a celebrity may seem like a cakewalk on the surface, but Hollywood’s finest have to be on call and ready to shoot off to an interview, photo shoot or audition at a moment’s notice. Plenty of celebrity moms catch flak for employing an army to look after their children, but such a large staff is often required for security reasons as well as childcare. This need for heightened security is a contributing factor to the rise of male nannies, or “mannies,” amongst celebrity parents.

0saves
Save
If you enjoyed this post, please consider leaving a comment or subscribing to the RSS feed to have future articles delivered to your feed reader.
← How to Connect with Your Baby When Away on Business and Miss Him | A Mom’s Guide to Balancing Work and Family →