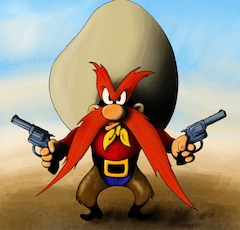 The fiery temper of the cowboy caricature Yosemite Sam is matched by his flowing, flame colored facial hair he’s sported since his 1945 debut in the animated short Hare Trigger. For decades, children have been endlessly amused by the diminutive cowpoke’s antics; however, there are some valuable lessons to be learned from Yosemite Sam. Here are ten of the things that kids can pick up from a Saturday morning’s worth of vintage cartoons.

Yosemite Sam definitely provides the traditional lesson that ‘crime doesn’t pay’ through his cartoon character. It may seem a bit old fashioned, but it is still an important lesson for every child to hear.