10 Lessons Kids Can Learn from Rocky the Flying Squirrel 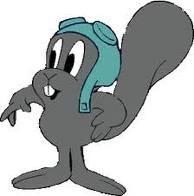 Rocky is the loyal sidekick of Bullwinkle J. Moose from the classic TV animated series The Rocky  & Bullwinkle Show, also known as Rocky & His Friends for the first two seasons. Rocky was the brains of the duo, typically bailing out Bullwinkle from his bumbling plans. The plans often centered around  combating their adversaries in the series, a KGB-type pair of spies named Boris Badenov and Natasha Fatale. As Bullwinkle’s pal, Rocky demonstrated some valuable examples for faithful viewers. Here are 10 lessons that kids can learn from Rocket J. Squirrel: