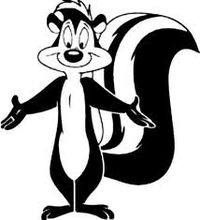 As one of the most controversial Looney Tunes cast members, Pepe Le Pew is a study in what not to do. As a character, Pepe never enjoyed the overwhelming success that many of his co-stars found; women’s rights groups and concerned parents alike have found him distasteful enough to diminish his appeal as a cartoon superstar. Here are ten of the valuable life lessons that children can learn from a Pepe Le Pew short or two.

Sometimes it is these negative lessons that can stick with kids even better than the positive approach of what you ‘should’ do.