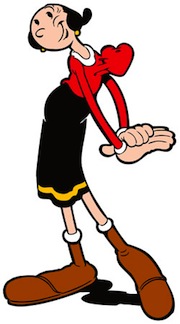 As the willowy love interest of spinach-swilling sailor Popeye, Olive Oyl has earned her own place in comic book and animation history. Abnormally tall and rail thin, her distinctive appearance sets her apart from the rest of animated love interests in history; Olive Oyl is certainly her own woman. Here are ten lessons that generations of children have learned from watching her in action.

Olive Oyl is one of those cartoon characters that was continually evolving with time. Watching that transformation over through the years can be one of the benefits of viewing both the older and more current versions of the Popeye cartoons.