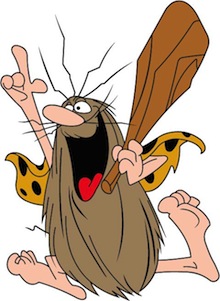 Captain Caveman is the cartoon sidekick of a trio of crime-solving gals – Brenda, Dee-Dee and Taffy – collectively known as Captain Caveman and the Teen Angels, in the Hanna-Barbera animated series of the same name. Cavey, as the girls called him, uses some rather interesting powers and traits to help solve mysteries on the show. Despite his peculiarities, Cavey offers some valuable lessons for kids, as you’ll see here: